Please, do not post elsewhere the code found here.

– The code should reside in one place and people should use links to my site instead. I have a hard time browsing the Internet for pieces of code sometimes, and finding old or obsolete code instead of links to the original developer is always a pain in the ass.

– I expect people to comment on the code and make optimizations/new developments, especially for student usage. Having this in mind, the code itself is an ongoing process which can be followed by students, from its first state (intelligible, but unoptimized) to its latest state (optimized, but unintelligible). Many people asked me how the code becomes awful and almost impossible to understand. It is my chance to show that I always start from a human approach and I am ending to a computer approach, and that this is always an endeavour that takes time and patience and endless computations and verifications, it doesn’t just come from thin air.

– the last reason is that I collect stats on page visits and downloads, which show me where to insist with open source development and where not to. I cannot collect stats from foreign sites, nor do I wish or have the time to do so.

I have bought 3 pieces of SKU14220 – DIY 4 Digit LED Electronic Clock Kit Large Screen Red Blue Green LED from banggood.  At ~ US$12, it seemed a good deal and most interesting. Following my experience with the EC1204B clock, I was almost sure the firmware was going to be bad.

Bad is a nice thing to say. The firmware was horrible:

– the setup is tricky and not easy to remember/understand;

– many people comment it is too bright during the night.

– the STC 15F204EA processor was a bad choice. 4K of flash do not suffice to build a nice and comfortable firmware for the end user, in my experience this design needs an processor with at least 8k flash.

So I decided to modify the latest firmware for the EC1204B clock and make it available for this version, with the necessary modifications. 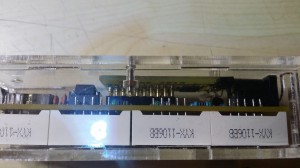 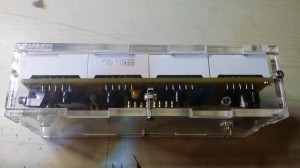 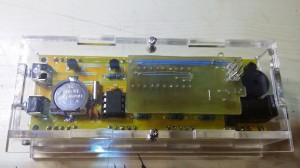 The software/firmware presented here is a complete rewrite from scratch, just by observing the schematic and by understanding the way it works. It did not involve any kind of disassembly of the original firmware, reverse engineering or other similar stuff.

I do not condone copying the work of others in any way. However, progress is difficult to achieve these days from zero and it is easier to build up on something that already exists, while respecting the original work and effort.

I advice my readers to buy Banggood kits, the PCB has an excellent quality and all the parts delivered will be used, even with the modifications I suggest in this post. The idea is to start learning soldering and coding using affordable ressources.

After studying the schematic, it became obvious the only thing that needed to be replaced was the processor itself, with another firmware.

I couldn’t find any Atmel processor compatible pin to pin with the original, STC 15F204EA processor. The available place to insert a custom PCB in the processor’s slot is also narrow, so space would be of the essence in choosing a replacement processor.

This is why I have decided to use an ATmega8 AU, which is the smd version of the ATmega8.

Supplementary, a DS18B20 was added to measure temperature along with a photo-transistor, to implement automatic dimming of the display.

From a mechanical point of view, the programming pins were designed to go through the plexiglass wall, in order to allow programming of the device even when it is fully enclosed, without the need to disassemble the enclosure (see Figure 3 above). 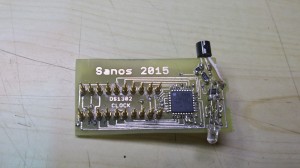 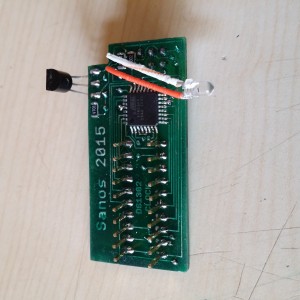 Figure 5. The bottom side of the PCB 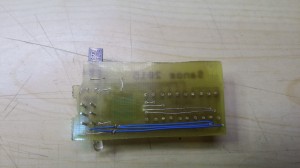 Figure 6. The top side of the PCB

The software, or firmware, is a variation of the software used for the EC1204B clock, in a previous post of mine.

Disregarding the process of eliminating pieces of code that did not apply to this particular clock, the two main additions are:

-the implementation of analog reading from a photo-diode, quite straightforward process;

– the implementation of digital dimming a multiplexed display.

A few words about the latter. The problem was to dim the display without having disturbing light shifts.

How it was done: In a multiplexed display, only one digit is lit a a time, with the specific data for that digit. Then, we go to the second digit and so on until the last. Basically we have an eternal cycle of lighting each digit at a time, cycle equal to the number of digits to be lit. What if we would add to this cycle “dead” times, when we don’t lit any digit? The result will be a software pwm on the multiplexed digits, up to the point when all the digits start to tremble. After a few trials, I have discovered that this has to stop at around 50 cycles. After 50 cycles, the dimming process isn’t perceived by the human eye, but it inserts this trembling of the digits.

The transformation became : cycles = (54-light), which is a rough approximation of the hypothesis above. A supplementary condition is also in effect, after reading the light value:

This was necessary from direct observation: at 50 light, the display was too dimmed and the light  value (0-100) didn’t correspond well with the dimming if it was to be used full scale.

Feel free to play with the code and try to modify and optimize it. I hope it is easy enough to understand after 1-2 hours of study, in its most intimate details.

At each stage, the last select key press is the memory storage. After storing selected parameters, the clock will beep. If you fail to store parameters (i.e. you do not press the button), the parameters will be in effect until the next reset of the clock.

All the project for Atmel Studio 4, including a PDF with the PCB printout and necessary datasheets for parts (DS1302, DS18B20) can be downloaded here.

Following Bob Pike’s request to have the firmware show temperatures in F instead of C, the code was modified with the possibility to program the temperature display unit. The latest version can be downloaded here.

Many people (including me) complain about the DS1302 drift, related to badly manufactured quartz resonators that do not offer a real 32 kHz (32768 Hz) clock.

The drift may become so big, a clock can have easily +- 10 minutes drift in a matter of months. Having two or more clocks in different rooms may easily lead to headaches in the morning when the decision to leave for work becomes a growing pain week after week.

The best practice would be to insert a trimmer capacitor in series with the quartz and set it to obtain a 32768 Hz clock. Even this practice is prone to errors due to:

– normal trimmers are influenced by temperature. Just a little, but enough to generate a 1-minute drift every month or so;

– usually there is no or very little space on the PCB to insert a trimmer properly;

– the DS1302 clock could stop if a trimmer inserted in the circuit.

I have imagined a software solution to the drift, by calculating it in between two clock settings.

I began by asking myself what would be a disturbing drift, and I came with 5 minutes per year at a minimum, as being disturbing. However, setting the clock every year wouldn’t be too much to do, since I already set the clock twice a year when the daylight saving time appears and disappears.

Since the setting is done manually and one could press the set button with a 1 second drift, if the setting would be done after 20 days, it would lead to a supplementary error drift of 365/20=18.25 seconds a year, which is less than a minute per year: it wouldn’t even be noticeable.

The whole idea is to set the clock twice in the same month from a good time source (like your PC, after synchronizing its time with a time server). Why during the same month? Just to make the subroutine that computes time difference easier and less flash consuming. Anyway, there’s less than 1K of flash available for this with this project.

So: you set the clock on the 1st of the month and then you set it again on the 20th or 30th of the month.

The clock will remember this drift and the processor will either add or subtract (depending on whether the drift is positive or negative) one second every 1185 seconds, by reading and rewriting the seconds in the DS1302.

Two errors are now in place:

– a supplementary error drift from manipulation of the setting button of 365/20=18.25 seconds a year: almost non existent either;

In fact, this kind of semi-automatic drift compensation can lead to an error of at most 30 seconds a year, much lower than we could obtain by inserting a trimmer and setting it to achieve a 32kHz clock for the DS1302. We would experience annoying drifts in 10 years of non-stop operation of the clock.

What if we set the time more than once during the same month? The software would take into consideration the last interval between two settings. If the interval is too low (e.g. 3 days) it could lead to a wrong computation of the drift compensation.

In order to set the drift compensation to zero, please operate two consecutive settings one after the other or by changing the month or year.

This version of the firmware can be downloaded here.

While working on my other project, the EC1204B Led rotating clock and implementing some requests from my readers, I have discovered ways to improve the code and also minor bugs that were addressed.

8. Combining all latest developments in one and allowing for setup without the need to reprogram the flash

While working on the latest requests for US mode (12H display and Fahnrenheit instead of Celsius), I used EEPROM variables to shorten the code and allow for its implementation. Unfortunately, to change these modes, the clock needed to be reprogrammed.

After many optimizations, I have succeeded to implement a way to set these modes without the need for a programmer.

Toggle between US and EU mode is now done from the menu itself:

Resetting the clock while pressing the SET key will toggle between regular clock display and clock/temperature display (temperature is displayes for 1 second every 10 seconds).

At this moment, the firmware has 8160 bytes, further development on this firware being almost impossible, at least with the ATmega8.

Following the latest developments on the EC1204B clock, a new set of improvements to the code were added: